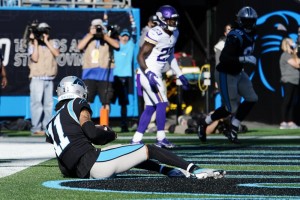 CHARLOTTE, N.C. — When the Carolina Panthers rewarded Robby Anderson with a three-year, $37.5 million contract extension in the offseason, they figured he would be a huge and productive part of the offense this season.

But Year 2 in Carolina has been a struggle for the 28-year-old wide receiver.

Through six games, Anderson has been targeted 40 times, but only has 15 receptions for 190 yards.

That’s well off his six-game pace from a year ago when Anderson caught 40 passes on 51 targets for 566 yards. Anderson had three drops last week in a 34-28 loss to the Vikings and was held to 11 yards receiving despite being targeted 11 times.