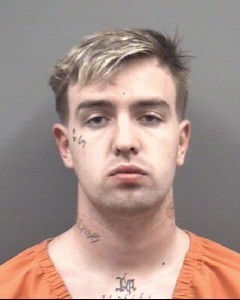 ROWAN COUNTY, N.C. — NASCAR Xfinity driver Carson Ware was arrested for assaulting a female, along with other criminal charges, in Salisbury early Wednesday morning, according to deputies.

The Rowan County Sheriff’s Office responded to Athens Drive to investigate a possible physical disturbance in progress. Upon arrival, deputies observed broken glass and clothes scattered across the floor when looking through the glass of the front door. Loud noises were also heard coming from the inside of the residence.

Deputies then saw a person, later identified as Carson Ware, peeking out the window and he was then asked to step outside. Ware had blood on his face, along with a swollen lip.

Through an investigation deputies learned that Ware was staying with Kenneth Evans, a co-worker of Ware’s, and his wife Melissa Katsamperis, while he recovered from some recent rehab. The couple explained to law enforcement that Ware came to the residence the previous evening very intoxicated and belligerent. The couple stated that he was advised to go to bed several times, but Ware became violent and pushed Katsamperis and slapped her in the face.

After the husband came to his wife’s defense, the couple went to their room, locked the door and called 911 to report the incident, according to a news release.

When deputies entered the residence they were able to see multiple damages including a shattered bedroom door, along with the door frame being busted, and two broken flat screen TVs.

Ware was transported to the Rowan County Magistrate’s Office and was charged with assault on a female, simple assault and injury to personal property, according to deputies.

Ware is a member of Rick Ware Racing. They released the following statement Wednesday evening about the situation:

“This morning I was notified of a situation that involved Carson Ware. At this time, Carson has been indefinitely suspended by SS Green Light Racing and NASCAR. While I am frustrated by the actions of Carson, I am even more disappointed for Bobby Dotter and his entire team. Bobby has been a great ally through the years, and I hate to see SS Green Light Racing under scrutiny due to the actions that do not reflect the reputation and image that Bobby has worked hard to uphold over the years. My hope is that Carson will get the help that he needs during this difficult time.”