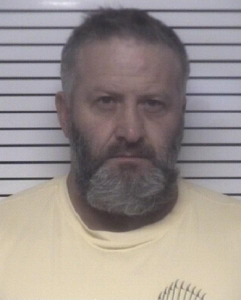 IREDELL COUNTY, N.C. — According to the Iredell County Sheriff’s Office, a Mooresville man is facing charges after he allegedly shot another driver in the face along Interstate 77 Monday.

The sheriff’s office received a report that a shooting happened in Mooresville in the area of Exit 31 South on Interstate 77. Deputies were notified that the victim had been shot in the face.

When arriving at the scene, an investigator located the victim sitting in his vehicle suffering from a gunshot wound to the face. There was also an uninjured juvenile in the vehicle.

The victim was stabilized by Iredell County EMS, then transported to a trauma center in Charlotte for additional medical treatment.

The investigator quickly gathered information that led to the suspect’s vehicle at a nearby Shell gas station. At the gas station, a deputy located the suspect vehicle, and the driver, identified as 50-year-old Mark Baucom. Deputies say inside the vehicle, a Glock 9 millimeter pistol was located along with several spent shell casings.

After gathering information, including evidence from both vehicles and interviews with witnesses, investigators were able to obtain arrest warrants for two counts of felony assault with a deadly weapon with intent to kill and one count of felony discharging a weapon into a moving vehicle for Baucom. The suspect was taken to the Iredell County Detention Center where he was served with the warrants, deputies said.