CHARLOTTE, N.C. — Two food trucks, only 1 Golden Spork. Which dish will smoke the competitor in the BBQ Battle?  The trucks, Dan Good Que and K&N BBQ, will face off with their ultimate barbecue dishes to determine who is top hog. Let’s meet our competitors… 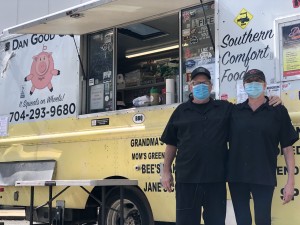 Dan Good Que:
When Dan Jones won a State Fair BBQ competition in 2014, a judge told him “That’s Damn Good Que, Buddy!” Dan’s friend corrected him, “No… it’s DAN Good Que!” The name stuck… and so did the BBQ. On the ride home, Dan, a former national sales manager for over 25 years, and his wife, Lady Jane, decided to retire early and build a food truck. Shortly after, Dan had a stroke and had to learn to walk again. Overcoming health challenges inspired Dan to give back big to the community by providing countless meals to those in need. His fan-favorite barbecue recipes are ‘rustic classics’ handed down from family and friends. 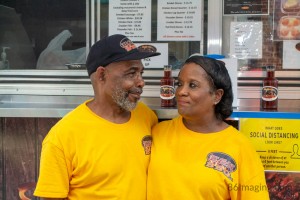 K&N BBQ:
Faith, family and a dash of secret spices — K&N BBQ’s motto, ‘Slow smoked, taste to the bone, full of flavor… and family” runs deep. Husband and wife duo Terry & Daphne Brown began K&N BBQ, named after their grandchildren, in hopes of having a legacy to leave for their family. Terry’s passion for slow smoking mixed with his signature spice blend and sauce pairs famously with Daphne’s scratch made sides and desserts. Their goal?  To bring food to the community that is full of love.

April Smith – @CLTeats
April Smith is the founder of @CLTeats and Social Ape Marketing. She created the well known CLTeats instagram account after years of getting to know the local food scene. The surge to more than 17 thousand followers in the last few years proves the Queen City is just food-obsessed as she is. In her marketing work, April works closely with restaurants, breweries and festivals. When she’s not glued to her screens, she’s traveling, reading or spending time with her dog, Frank

Ryan Jones – @thefooddudeclt
Engineer by day, foodie by night (and some snacks in between). Ryan, aka The Food Dude CLT, is an NC native who grew up in Goldsboro and attended North Carolina Agricultural & Technical State University. He moved to Charlotte in 2015 and hasn’t stopped scoping out the culinary scene since. Picking a bbq champ won’t be easy so let’s see if the Food Dude… Abides.

Kasee Keaton – @SpaceKaseCLT
Kasee Keaton, aka “SpaceKase” has created a happy ‘space’ for food, fun and travel in her popular “spacekaseclt’ blog. Highlighting brews, chews and everything in between, follow her adventures and become a fellow “Space Kadet.”

*SPOILER ALERT* Scroll past the gallery for the winner…

…And the winner is:

Watch: K&N BBQ serve up some of their winning ‘que on Rising.