The Charlotte-Mecklenburg Police Department says the 14-year-old girl that was reported missing from northwest Charlotte, after she was last seen on Sept. 27, has been located.

According to police, Nataly Rodriguez was located unharmed and in good health. 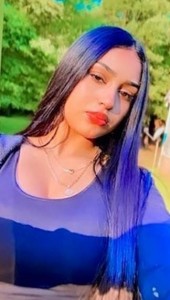 CHARLOTTE, N.C. — The Charlotte-Mecklenburg Police Department is asking for the public’s help in locating a 14-year-old girl who was seen in September.

Police said Nataly Rodriguez was last seen on Sept. 27 around 6:40 p.m. when she reportedly left Merrily Lane, off of Mount Holly Road, in northwest Charlotte in a gray vehicle. She has not returned, and her parents are concerned for her safety, police said.

Nataly has been described as 5’2″ tall, weighing 90 pounds with black hair and brown eyes. She was last seen wearing a black sweater and dark blue jeans.

Anyone who sees or has information on the whereabout of Nataly Rodriguez is asked to call 911, immediately.