CHARLOTTE, NC – The Charlotte city council approved new voting maps at its business meeting on Monday. The move likely leading to a legal challenge from several residents in the Hidden Valley neighborhood.

“They don’t listen to us but now it’s time for us to stand up Stand up. and show our voice,” said Dr. Blanche Penn, a Hidden Valley resident.

“We’re standing together in solidarity in saying that we need justice. Justice for our communities. Justice for the people who want to be left alone,” said Charlene Henderson, another Hidden Valley resident.

More than two dozen people showed up in smocks and masks to protest the council decision. Saying the politicians “had been corrupted.”

To even out the population distribution, the council must adjust voting districts following the 2020 census.
The approved plan moves precinct 42 and 82, the Hidden Valley area, from District 4, which is predominantly Black, to District 1 which has a majority of white voters.

Several residents filed a legal challenge against the new maps in anticipation of their approval.

“You better believe, we’re going to be at those polls and we’re going to vote everybody out of there. If we can do it, we will do it. And we’re not playing,” said Dr. Penn.

“This plan could actually strengthen our influence on the dais and in the city as Black voters,” said council member Renee Johnson. She represents District 4.

Some on council pointed to the move as an opportunity for residents of Hidden Valley.

“We are in a position in an open race to hand pick our elected. Hidden Valley is not losing. You’re winning. Respond,” said council member Victoria Watlington.

In total, 16 voting precincts are being moved for the next election cycle. 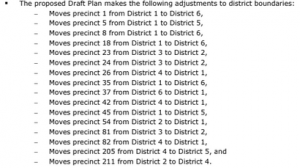